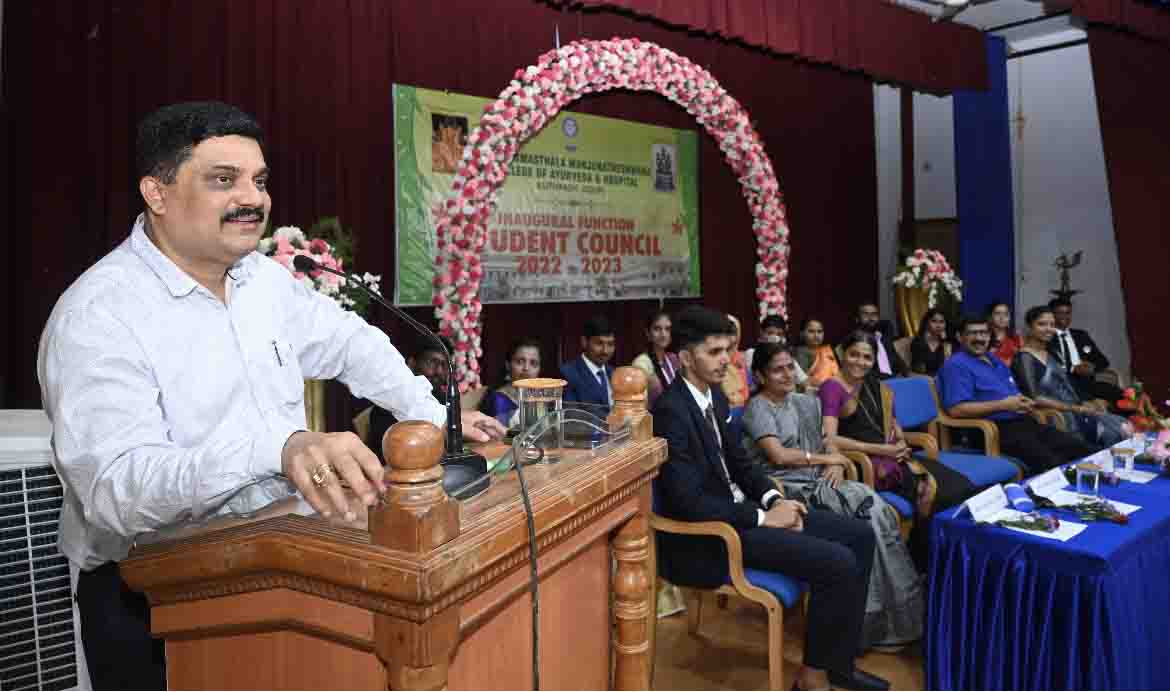 The programme of students’ council inauguration ceremony started from 3:00 pm. All the dignitaries were welcomed and escorted to the stage. Prayer was done seeking the blessings of Lord Dhanvantari Later, all the dignitaries offered flowers to lord Dhanvantari statue seeking the success of the program. There was a brief introduction and welcoming by floral greetings to Dr. Krishna prasad, Founder and managing director of Prasad netralaya group of hospital, the principal of institution Dr. Mamatha K V, UG dean Dr. Veerkumar, PG associate dean Dr. Sucheta kumari, staff members, UG, PG, Interns students gathered in the event by newly elected president Mr. Vinayaka joish. The badging ceremony was done to all the council members of newly elected students’ council by the chief guest of the ceremony.
Oath taking ceremony: –
Oath was taken by all the council members to be lawful to their duties and responsibilities for upcoming all the events conducted in the institution. Later, the momento was presented to the chief guest by principal of institution Dr. Mamatha K V. Then, there was speech done by the chief guest addressing the gathering. He congratulated all the council members who were newly appointed. He opened up about his college life where in he was also one of the member in the student council. He found out and appreciated about PG students being a part students’ council. He also appreciated the active participation of the council members in both academic and other curricular activities. He was astonished by the academic excellence shown by the students and said this may be the reason for the institution to be in the number one position in university level. He appreciated about the immense support and encouragement provided by all the teachers and hereby appreciated their efforts too. Then, he congratulated Principal ma’am, council members, teachers, and all the students for their active participation and for their enthusiasm. Later, he wished a best of luck to the newly appointed council members and stepped aside.

Prize distribution ceremony to distinction and rank holders in RGUHS examination :-
It was delivered to the respective rank holders and distinction scorers by—
PG scholars – Dr.Mamatha K V
3rd year distinction scorers—Dr. Veerkumar
2nd year distinction scorers—Dr. Sucheta kumari
Speech by Dr. Mamatha K V,
A wonderful and inspiring speech was delivered by the principal Dr. Mamatha K V by addressing the gathering. In the speech she motivated the council members to be perfect role model to others and set a hope on the newly formed students’ council
Ma’am also put forth some the schemes such as
green campus followed by the earlier council members to be continued by the newly formed once and also bring in new creative ideas and implementations of new milestone to any of the events which can imprint in everyone’s mind and can be a model to the upcoming leaders of next student’s council. By saying this, ma’am wished best of luck to all the council members to succeed in their upcoming all the events.
Vote of thanks: –
A vote of thanks to all the dignitaries, teachers, students was delivered by Ms. Srinidhi S Shetty, general secretary, student’s council. She also conveyed a brief note on the yearly plans and programmes which will be conducted by the student council in the whole year of 2022-23. Later she stepped aside by thanking all for their gracious presence.
The programme ended by singing the National anthem.